SINGAPORE, Dec. 09, 2022 (GLOBE NEWSWIRE) — This investment discussion was initiated in October this year during the meeting between the president of FSN, Lee Sang-Seok, and CEO of Fellaz, Bobby Bhatia, during his visit to Korea.

Through this strategic investment Fellaz will further establish its presence as a Web3 entertainment service provider, bringing together the technology and vision with FSN’s market-ready solutions and expertise in the planning and operation of blockchain businesses based on market-dominant Web3 projects such as Sunmiya and commercial collaboration with named brands in the South Korean entertainment and commerce industry. The long-term cooperation will involve engaging in Web3-integrated IRL events, including NFT membership solution development, production of entertainment brands, and IP to continue the expansion and utilities within the Fellaz ecosystem.

As a blockchain technology partner, Innocus Global Group has invested in and strengthened cooperation with companies such as Nest in the UK, Leeway Hertz in India, and SotaTek in Vietnam. With this investment, Fingerlabs will join Fellaz as a prominent technology partner, and Fellaz will solidify its presence and expand its global reach by entering the Korean blockchain industry through Fingerlabs.

The two companies decided to build new NFT use cases in the cultural industry with the Favorlet blockchain wallet developed by Fingerlabs as the means to store and authenticate NFT memberships and tickets for the Fellaz-led global music festival scheduled for March next year, the details of which will soon be announced this month.

Lee Sang-seok, CEO of FSN, commented regarding the investment, “We always had in mind a vision to expand globally. Through Fellaz, a project that is expanding throughout Asia, starting with Singapore and Japan, we can finally achieve this goal. We hope to create a great synergy between FSN’s blockchain business and Fellaz through a series of collaborative projects down the road.”

Bobby Bhatia, CEO of Fellaz, said, “FSN is the best digital marketing corporation, and Fingerlabs is the market-dominating pioneer in the Korean blockchain scene. Together with Fellaz, we hope to maximize the various strengths we each bring to the game. Together, we will have an unrivaled influence in the blockchain industry, and by continuously optimizing our blockchain ecosystem, we will work towards expanding our community and token utility.”

Based in Singapore, Fellaz is a multichain Web3 entertainment ecosystem providing content production and distribution for the metaverse, an NFT solution for artists, and a decentralized fandom community infrastructure. Alongside its network of global partners, Fellaz is a one-stop solution and ecosystem designed to help businesses, creators, and fans transition into the Web3 entertainment space by taking the best from the metaverse, decentralization, and NFT blockchain technology and integrating them with original content and Web3 diversification. 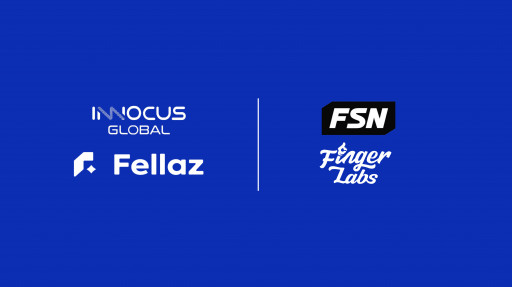