NEW YORK, Oct. 25, 2022 (GLOBE NEWSWIRE) — After months of anticipation in the web3 gaming space, MetaKing Studios has officially launched the first phase of the BLOCKLORDS event. BLOCKLORDS, an upcoming multiplayer experience, is backed by top names in the industry including Krafton, Square Enix, Makers Fund, Bitkraft, and Delphi Digital. New brand ambassadors were also announced today, including UFC fighter “The Count” Michael Bisping, adding to the list of names and celebrities pledging their allegiance to the franchise.

Dubbed “#LetTheGamesBegin”, the event marks the kickoff of BLOCKLORDS’ Hero claim and road to Early Access. Starting today, players will be able to collect exclusive banners representative of the game’s founding houses, which they can exchange for Heroes starting Nov. 8. BLOCKLORDS Heroes are playable player-owned digital assets; by owning a Hero, players gain entry to Early Access and have the opportunity to establish their legacy in the game world early on as a core founder of the medieval world’s history and lore.

In celebration of the event, MetaKing Studios has also announced Alliances as part of the game’s core social experience. Launching today, this new social feature allows players to use their newly acquired banners to join one of four factions known as Alliances. By joining an Alliance, players can bolster their chosen houses, fueling friendships and rivalries both in and outside the game. The feature is already live on the BLOCKLORDS Discord, with online support scheduled to release soon on the game’s official website.

“We’re creating an IP the likes of Game of Thrones, The Lord of the Rings, and Total War,” said David Johansson, BLOCKLORDS creator and CEO of MetaKing Studios. “In order to do that we felt we had to come up with a series of content that would essentially inspire others the way we were inspired with this idea.”

If you missed the livestream event, you can watch a recording of the stream here.

Players who pre-registered prior to the event will receive a free banner chest, enabling them to claim their Early Access Hero for free starting Nov. 8. Those who didn’t pre-register can still reserve their place in BLOCKLORDS Early Access by claiming a banner chest here.

To learn more about BLOCKLORDS, please visit blocklords.com or follow along on Twitter and Discord for updates straight from the studio. 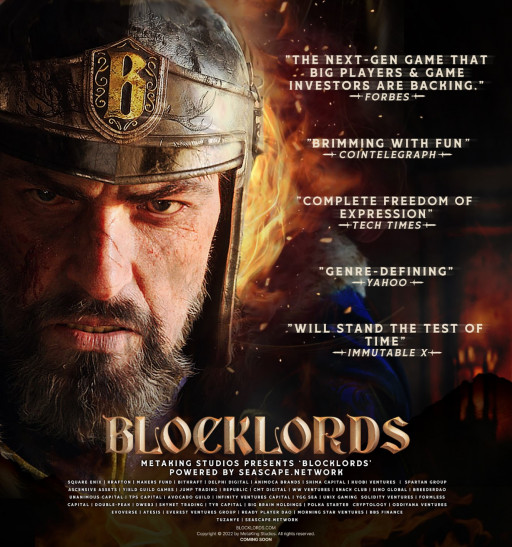